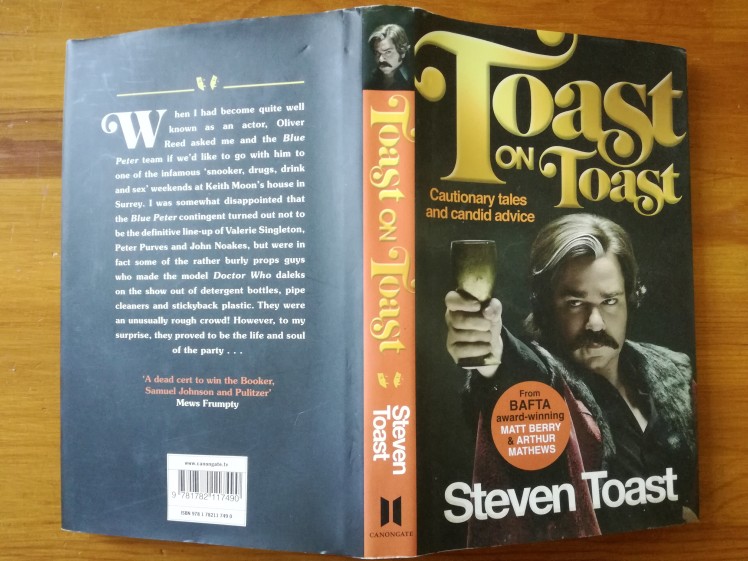 It’s part 3 of my blog series looking at comedy book indexes and time for a little Toast. This post is all about Toast on Toast: Cautionary Tales and Candid Advice by Steven Toast (authored by Matt Berry and Arthur Mathews, published by Canongate in 2015). The book’s online summary advertises that it features ‘a detailed index for quick and easy orientation’.As with the Alan Partridge books I, Partridge and Nomad (discussed in part 1 and part 2 of this series), Toast on Toast is a parody memoir of an established British TV comedy character.

Steven Toast, renowned thespian played by Matt Berry, has appeared in three series of Toast of London on Channel 4 since a pilot episode in 2012. The book is billed as ‘part memoir, part “how to act” manual’ and Toast is described on the blurb as a ‘jobbing actor’ with a ‘long and varied career on stage, and in television, radio and cinema’, whose many (fictional) credits include such treasures as Bendy McKenzie, Oooo Ducky! and Man in a Flute Case.

Naturally, the main focus of the index is on Steven Toast himself, surrounded by a range of entertaining supporting figures, mostly fictional but also some real TV personalities (often playing a parody of themselves).

The subheading wording for the main entry for Steven Toast gives you some measure of his self-regard:

There’s a few random oddities to be found here too:

Some insight can also be gleaned into Steven Toast’s background within the Toast family entries:

As well as from the family backgrounds, we are afforded further character information on Toast from his love interests.

The entry for Toast’s ex-wife is lengthy if uncomplimentary:

In the TV series, Toast is shown to enjoy regular encounters with Mrs Purchase, wife of his fierce rival Ray Purchase. Mrs Purchase (her forename is not given) also has a considerable entry in the index:

More on his nemesis Ray Purchase below.

The book index also includes separate main entries (as it were) for Viagra and a few of Toast’s favourite sexual positions including the ‘Chicken Shop’, the ‘Quick Park’ and the ‘Truckstop’.

The aforementioned Ray Purchase is Toast’s main rival and fellow thespian. He is afforded a long, detailed and bitter entry in the index:

Clem Fandango, a hipster doing work experience in voiceover recording, is another colleague with whom Toast has issues, mainly due to his insistence on many retakes in the sound booth. Here’s his entire entry in its full glory:

Yes, I can hear you, Clem Fandango.

A few real-life figures from UK television and politics appear in the book index.

The somewhat over-energetic British comedian turned attempted revolutionary Brand does not actually appear in the book at all, and nor does page 654.

Though these subheadings are based on real events in the UK media and politics in 2015, former Labour Party leader Ed Miliband also does not appear in the book. Pages 89 and 90 are chapter opener pages with no text.

Dame Tiri Te Kanawa likewise does not feature in the book. Neither does Dame Kiri Te Kanawa.

There is some further spectacular rudeness (and sweariness) aimed at other real celebrities in the index but I won’t repeat them all here. You may look those up yourselves.

Some real-life TV stars have appeared in the Toast of London TV series as parody versions of themselves. These alter-egos feature in the index as a nod to the TV series storylines, but do not appear in the book text on these pages:

Musical leading man Michael Ball was seen to expire in the TV show Toast of London while playing a version of himself but is still alive and singing in reality. I am unable to pass comment on John ‘Bergerac’ Nettles’ poaching activities.

One of my favourite things about Toast’s world in the TV show and the book are his deliciously titled fellow (fictional) thespians. Here’s a few such examples from the index:

Not all of the above-named characters actually appear in the book though. Some of these page numbers lead the reader to blank pages or full-page photos.

There are some terribly useful qualifying phrases in the index too in case of reader confusion:

Again, none of these lead to an actual text entry in the book. This is another example of the comedy index breaking the standard indexing rules.

As mentioned earlier, the Toast on Toast index has many things in it that are entirely for comedic value and don’t relate to anything in the main text at all, for example the following:

None of these actually appear in the book and there is no page 603, as the book is only 224 pages long.

With my indexer’s hat on, another slight issue for me, and perhaps a sign that the Toast on Toast index was probably not done by a professional indexer, is the order of subheadings, which are frequently neither in alphabetical, chronological, page number nor themed order. However, I can (mostly) forgive this as it is so entertaining to read.

The Toast on Toast index does present a few indexing issues as noted above – several entries in the index that do not appear in the book, page numbers in the index that do not exist, a fair few locator strings and the strange and inconsistent order of subheadings. As stated on its blurb, it does indeed feature quite a ‘detailed index’ but maybe not such ‘quick and easy orientation’. This does all however still add considerably to the character and comedy of the book and it is a hell of a lot of fun.

Update (14/12/16): I’m glad to report that the book’s co-author Arthur Mathews has now kindly confirmed to me via Twitter that he wrote the Toast on Toast index himself. More than happy to be able to give due credit here. I’m a big fan.

I really enjoy watching the comedy characters of Alan Partridge and Steven Toast and I have had a hoot reading all three of these books and looking at their respective indexes. It’s good to see that the extra thought and effort was given to making the index a comedic part of each book in its own right.

I’m pleased to have been asked to rework the first three of these blogs (on the two Partridges and Toast) into an article for the next issue of The Indexer, the international journal of indexing. [Update: This was published in the March 2017 issue of The Indexer (Vol. 35, No. 1), available online via Ingenta here.]

Future blogs will focus on the unusual indexes in some other current TV comedians’ non-fictional works. Here’s looking at you, Charlie Brooker and Richard Ayoade, for starters.

I’d love to hear of any other similar comedy book indexes. If you should know of any, please do get in touch by leaving a comment, sending a message via the Contact page or tweeting me @PC_Bain.

Paula Clarke Bain is a professional book indexer and editor. She likes comedy, books and indexes and really likes comedy book indexes. See more at her website at baindex.org or on Twitter @PC_Bain.

5 thoughts on “The comedy book index, part 3: Toast on Toast”