Back to the comedy index blogging and back to the books of Brooker. In the first part of this blog post (here), I looked at the indexes to Charlie Brooker’s Screen Burn and Dawn of the Dumb, his first two collections of columns for the Guardian newspaper. This blog will look at the two later collections of his ‘misanthropic scribblings’, The Hell of It All (2009; hereafter referred to as Hell) and I Can Make You Hate (2013; hereafter Hate), again both published by Faber and Faber for Guardian Books.

(Incidental thanks here to Prolifiko and their writing challenges, giving me a much-needed shot of blogging motivation and several well-timed boots up the behind. Yes, yes, I’m writing it now.)

As with the first two books, I believe the basic indexes were created by the publisher and then ‘joke-i-fied’ by the author, in his words. 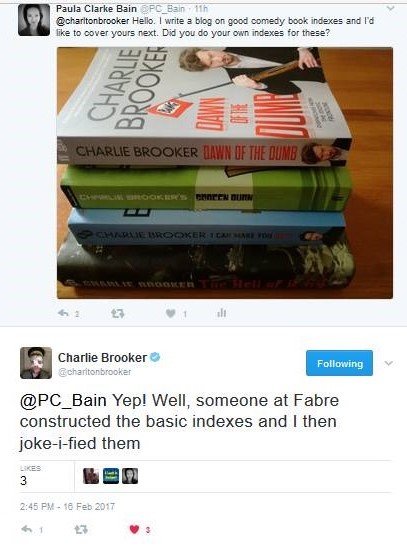 Rather less of the overall content relates to TV programmes and personalities in these two books (but there is a lot more happening in the index besides). The increasing reliance on reality TV to fill the schedules is reflected in the books with references to such televisual delights as I’m a Celebrity…, The X Factor and, rather tragically with hindsight, The Apprentice – ‘fronted by Donald Trump and his optical-illusion hairstyle, who’s rubbish compared with Alan Sugar’ (Hell, p.89). Enough said on that front.

The bizarre film and TV programme titles continue through these book indexes – some thankfully fictional (Vileda Supermop: the Movie) and others sadly not, including Help Me Anthea, I’m Infested! (which also gives rise to the later cross-reference: ‘infestation, see Turner, Anthea’).

There’s some fun being had with the TV personalities in the Hell index:

The Hate index continues with this, although some of the qualifiers are actually quite kind:

Griffiths, Derek, everyone likes him, 226

Another nice touch in the Hate index is the deliberate misnaming of many of the personalities. Surnames are correct and so do not affect a reader looking them up but many of the names go wrong beyond that:

And in a callback to The Apprentice:

Several politicians make their entries in these indexes. Those in the Hate index continue the misnomers:

The politician names in the Hell index are accurate enough but it’s the cross-referencing that’s done for laughs:

Let’s not think of any equivalents for President 45.

Speaking of cross-references, the author really starts to play around with these in the Hell index. A couple of nice examples here of the reader being addressed directly, like an aside to camera in one of Brooker’s own TV programmes:

British National Party, see BNP if you must

Fissions of the Vulture, see Visions of the Future although it’s not clear how you made such a weird mistake in the first place

There is also a rather fine wild-goose-chase cross-referencing thread. It’s not an entirely ‘circular’ cross-reference (where the reader is stuck in a loop of see references with no page numbers ever mentioned – generally an indexing no-no) but it takes a while to get there:

really nasties, see what sort of God lets something like that roam the Earth?

what sort of God lets something like that roam the Earth?, see spiders

As well as the quite hypnotic:

There are also a few additional helpful instructions for the reader:

Plus this useful example: 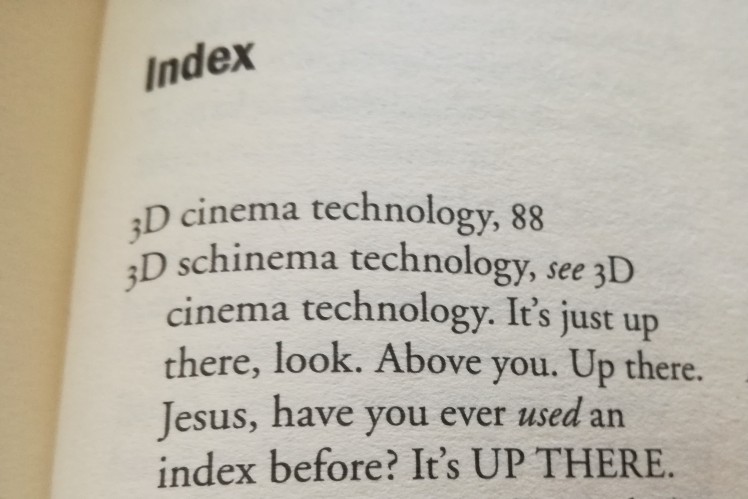 There is much more random daftness to be discovered in both indexes. Some of them read like meta-comments on the whole book indexing process itself, such as these from the Hell index:

letters of the alphabet, variously configured, 1–388

One particular discussion in the book on a potential range of greetings cards produces some unusual index headings, especially for the casual index browser:

The Hell index also contains one of the silliest sequences of index headings I have ever seen. This may only make sense if you grew up watching British TV adverts in the 1980s, as I did. (If you didn’t, the video at the foot of the page might help. But it might not.)

The Hate index has more of this postmodern-ish meta-commentary (ooh!) on the indexing process and an increased sense of toying with the index reader:

amnesia, 17 or 19 or something in that region

ARK Music Factory, like anyone’s going to look that up for Christ’s sake, 227

Mattel, you know, the games company, stop reading this and get on with your life, 116

scanning the page for a reference that isn’t there, 67

The Secret in Their Eyes, not in the book; you should watch it anyway, it’s a good film

Smarties, green, mentioned in passing, dunno why you’re looking them up in an index, 147–9

[*Sensible indexer note: Yes, there are ways and means of linking indexes in ebooks now but I’m not going into that here. I’ll never get this finished.]

Some very strange things are going on elsewhere in the index:

Someone is behind you; not physically, but in spirit; call it a presence if that helps. This isn’t an index entry; it’s a warning: someone is standing directly behind you right now

you are imagining these words in the index

Spooky. And a final special commendation for another of my all-time favourite index entries:

Following on from the fun of the first two Brooker indexes (discussed in the first half of this post here), it seems that the author was finding his stride with adding more varied humour to these indexes.

The Hell index at 8 pages is the second shortest of the four indexes but there is still plenty to enjoy within it, especially that ‘yearning for chips’ sequence. The 18-page Hate index is a veritable triumph of comedy indexing in my eyes and a great one to browse through even if you haven’t read the whole book – which of course I have (cough). It’s excellent to see that the publisher Faber and Faber was prepared to give Charlie Brooker so much leeway with the index content and length. It does add a considerable something extra to the end of a very funny book.

Both indexes function perfectly well as working indexes to their books, aside from the deliberately wrong entries. Things are where the index says they are, except when they are not supposed to be. The misspelled celebrity names work really well too, as the surnames are left intact and so do not affect the reader’s use of the index, and the forenames are just wrong enough to be still recognisable while also (c)rudely laughable.

There seems to be less general swearing in these indexes, which was used to good effect in the earlier two indexes. Now the humour mostly derives from other tactics, with the notable exception of a short but stonkingly sweary cross-reference in the Hate index which leads the reader to Come Dine With Me. You can look that one up. It’s worth it.

In conclusion, then, it’s a great big hurrah from me for all four of Charlie Brooker’s book indexes. They work very well in their satirical context and they make me laugh every time I look at them, which I guess is kind of the point.

More monthly blog posts are in the offing with various other funny, unusual and/or sweary indexes I have recently discovered. I’m always on the hunt for more such things if you should know of any. Suggestions welcome please.

Till next time, que sera sera…

Paula Clarke Bain is a professional book indexer and editor. She likes comedy, books and indexes and really likes comedy book indexes. See more at her website at baindex.org or on Twitter @PC_Bain.

2 thoughts on “The comedy book index, part 5b: Charlie Brooker’s The Hell of It All / I Can Make You Hate”